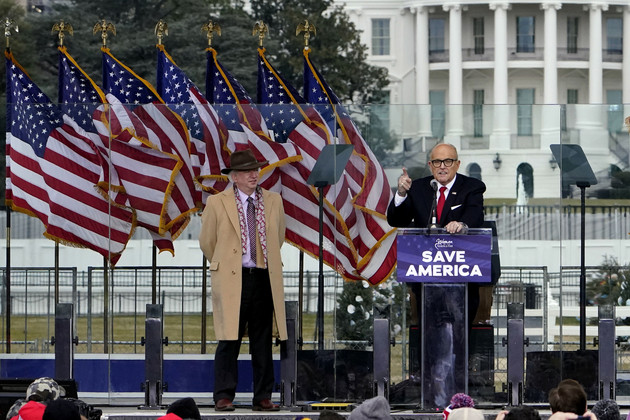 Eastman described these contacts and records as part of an effort to prevent the Jan. 6 select committee from accessing 600 emails that describe his efforts to build Trump’s legal gambit to reverse the 2020 election outcome — and, when that failed, urge state legislatures to simply overturn the results themselves. He argues that the documents are protected by attorney-client and attorney work product privileges that Congress has no business probing, even as the panel investigates the circumstances that led a mob of Trump supporters to attack the Capitol.

Eastman is also urging the judge, U.S. District Court Judge David Carter of California, to shield dozens of contacts with state legislators, some of whom he advised to appoint slates of pro-Trump electors, overriding the certified results of the popular vote in their states.

Eastman provides few details about the White House officials and attorneys with whom he was communicating, leaving their names out of the filing. But several of the attorneys filed declarations supporting Eastman’s descriptions of his work for Trump. Those declarations, filed under seal with the court, include attestations from Kurt Olsen, the lead lawyer in a Supreme Court lawsuit that Trump backed to overturn the election results, as well as Bruce Marks, a Pennsylvania lawyer who worked on Trump’s election litigation.

In making his case to Carter, Eastman provided an overview of the legal apparatus that mobilized to keep Trump in power after the election was called for Biden. He ticked through a series of cases that he worked on and described his contacts with the lawyers involved.

For example, in the Supreme Court case — Texas v. Pennsylvania — Eastman noted that “[t]en of the attorneys included on the communications (in addition to Dr. Eastman) were working on behalf of then-President Trump or his campaign committee directly), and the other three were assisting Dr. Eastman separately.” In addition, “21 of the documents contain work product as well as attorney-client privileged communications … transmitted to then-President Trump through his executive assistant,” Eastman contends.

The emails in question are all among 90,000 pages of correspondence Eastman sent from his account at Chapman University, where he worked during his bid to help Trump overturn the election. The select committee subpoenaed Chapman for the documents, and Eastman sued to prevent the school from complying.

But Carter has rallied to the select committee’s cause, repeatedly rejecting Eastman’s attempts to scuttle the panel’s demands. He forced Eastman to undertake a review of all of his emails and turn over tens of thousands of pages. And in a March ruling that continues to resonate, Carter held that Eastman and Trump “more likely than not” engaged in a criminal conspiracy to overturn the 2020 election by obstructing Congress’ ability to count electoral votes. He ruled that Eastman’s efforts to pressure Mike Pence to single-handedly overturn the 2020 election crossed legal lines, particularly as he urged Pence to attempt to avoid getting the courts involved.

Eastman argues in his new filing that Carter’s earlier ruling was flawed and that multiple attorneys in Trump’s orbit had a genuine belief the election results were illegitimate. That belief, he said, should not be the basis for a finding of criminality, even if it turned out to be wrong.

While most of Eastman’s Friday filing pertains to Trump’s broad legal effort, Eastman also described a set of far lower-profile contacts he is seeking to shield from the select committee, including a dozen emails he appears to have exchanged with Fox News host Mark Levin.

Eastman doesn’t identify Levin by name, but describes his contacts with a figure he describes as a “dual role” attorney — one who is also a member of the media. Eastman says this figure is “an individual who, in addition to his role as a radio talk show host, is also an attorney, former long-time President (and current board Chairman) of a public interest law firm, and also a former fellow at The Claremont Institute.” Levin has held all of those roles and has also long been an Eastman ally. In fact, The New York Times reported that Trump first became aware of Eastman after he appeared in a segment on Levin’s show in 2019.

“Dr. Eastman has collaborated on litigation matters with him in the past, and the twelve documents at issue here, addressed to his personal email address rather than his media address, were communications in that capacity,” Eastman’s attorney, Charles Burnham, argues.

Levin could not immediately be reached for comment. The select committee has previously described other Fox commentators’ contacts related to Trump’s actions around Jan. 6, revealing communications from hosts Sean Hannity, Laura Ingraham and Brian Kilmeade pleading with then-White House Chief of Staff Mark Meadows to get Trump to directly call off the rioters. The committee has previously requested an interview with Hannity but it’s unclear if he has responded.

Eastman is also seeking to shield 50 emails reflecting contacts with state legislators and GOP officials who he said sought out his legal representation.

“Those 50 documents include attorney-client privileged communications with 9 different clients or potential clients who were seeking Dr. Eastman’s legal advice regarding the constitutional authority of state legislatures to deal with election illegality and fraud,” Burnham writes.

“Seven were themselves state legislators; one was a party committeewomen and also agent of one of the legislators; and the last was a citizen coordinating information sessions for state legislators,” according to Eastman’s filing. “Confidential communications between an attorney and his client are protected even if unrelated to litigation.”

Last week, emails from another Eastman account — at University of Colorado-Boulder, where Eastman worked as a visiting professor — revealed direct contacts between Eastman and Pennsylvania lawmaker Russ Diamond. Eastman advised Diamond on crafting a resolution to replace Biden’s electors with Trump’s and to justify it by simply retabulating the popular vote to put Trump on top.

fashion matters
We use cookies on our website to give you the most relevant experience by remembering your preferences and repeat visits. By clicking “Accept All”, you consent to the use of ALL the cookies. However, you may visit "Cookie Settings" to provide a controlled consent.
Cookie SettingsAccept All
Manage consent